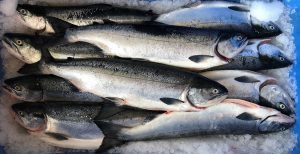 We decided to split the Galactic Ice off into its own LLC, and spin off the 4 gears to individual owners. Through many negotiations, I ended up with the least valuable gear, but the best skiff. The gear I got, known historically as John Brown’s gear, is at the end of row 2, out to 90 feet of water. The current is strong there, and the gear had been neglected and abused. The net was feeble and old, the winches poorly maintained, and the cameras broken. The good news is that, over the past 80 years, this gear position was year over year the top producer in Legoe Bay. So now our work is cut out for us, to bring it back to its rightful place in the bay. I made some headway this past year, but much more is necessary.

The gear (shall we call it the Salish Center gear? Not sure) was set up by legendary flaxseed oil magnate Dave Barlean to be able to fish with one fewer crew member than normal. Instead of having a person on the inside boat, pulling the head, controlling the breast anchor, and watching the video feed from the cameras, this gear has a set of lines that go from the outside head tower to the inside head winch, so that the person in the outside head basically controls the entire operation of pulling the net. On other gears the camera video goes into a shack on the inside boat, and at the end of the day the net with cameras is stored on the inside boat.

Because we had no one over there, the cameras on the head dictated that the net needed to be stored on the outside boat. This does not sound like much of a difference, but it is backwards from the reefnet fishing I have done for the last 27 years, and, although I am an early adopter, I change slowly. When the tide is running, it is hard to deploy the net from outside-boat to inside-boat. Finally, I talked to Steve Thatcher, a long-time Lummi Islander and reefnetter, and he showed me his camera setup. His array of 4 cameras lies between the first and second floor lines, and is not attached to the net it makes no difference where the net is stored each night. That was a major step toward normalcy for me, and helped a lot toward solving problems that seemed to come up daily.

The sockeye season came abruptly. One day there were just a few fish going through the gears, and then suddenly hundreds — our season lasted only 4 days, but was one of the best in many years. Because the environmental conditions off the Queen Charlotte Islands, known as the warm water blob, had finally dissipated, the sockeye run was one of the largest in history, and certainly one of the fattest. When I cut into the first sockeye of the season, I could hardly believe my eyes. The belly walls were as thick as a king salmon!

I decided to do some fat content testing. I cut a divot from each fish belly that included the ventral fins, and sent the samples to our local testing company, Exact Scientific. The first was 28%, unheard of, and definitely suspect, so I took several more samples. The lowest was 21%, the average 25%. For comparison, I got a fresh South East Alaska sockeye from a gillnetter, and tested it. 13.5%. I tried a Baker Lake sockeye, from the Skagit River, 16.5%. I tried a Bristol Bay sockeye, 7.1%

My eyes had not deceived me, nor had my taste buds when I grilled the first fish — it melted in my mouth, possibly the fattest sockeye I have handled in my 45 years of commercial fishing. Why? No one is talking, but my speculation is that while the sockeye were killed by the warm blob those 3 years, the feed they are used to finding in the Bering Sea was not. It was growing and multiplying, waiting patiently for its predators. I think these sockeye found huge quantities of zooplankton and krill, and feasted.

The good news is that the Salish Center has reserved 3000 lbs of this amazing fish to use for fundraising later this year. My hope is to smoke whole sides, and give them with a minimum donation. To taste what that might be like, go to Haggens, New Seasons Market, or Whole Foods to get Lummi Island Wild smoked sockeye. It is stunning!

About the Author: Riley Starks

Riley is the founder and Executive Director of the Salish Center for Sustainable Fishing Methods. Its goal is to educate the public about the fragility of the Salish Sea, the reefnet fishing industry, and the advantages of using sustainable fishing methods.